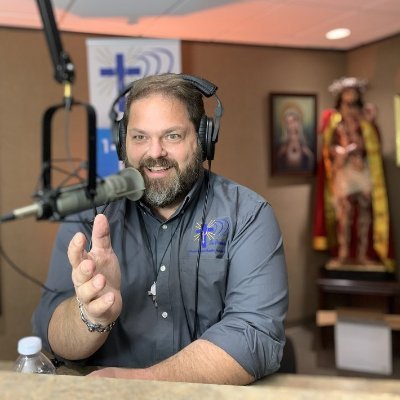 Joe McClane, married since September 2000 with six kids and two grandkids, is the host of the nationaly syndicated talk radio show, “Catholic Drive Time,” heard Monday-Friday, 7-9am Eastern across the Guadalupe Radio Networ, the Station of the Cross radio Network and beyond. Prior to that, Joe was the Mission Development Director, and General Manger for the Houston Market for the Guadalupe Radio Network. Also, from 2008-2013, Joe was the Director and Events Coordinator for the Fullness Of Truth Catholic Evangelization Ministries, planning and executing large apologetics conferences throughout Texas.

In 2019, Joe released his first feature length documentary film, “The Other Side of Fear: Facing the father wound,” which can be seen for free, along with his other films on his Vimeo account.

Oh yeah… Joe grew up in the Church of Christ but fell away and became agnostic in his teens. He joined the Catholic Church at the Easter Vigil of 1999 and was married, to his lovely wife Michelle, in September of 2000. Joe attributes his full conversion to a spring day in 2002 when he got on his knees and “let go and let God”. Joe’s journey went into hyper drive at that point and he’s been in love with the Catholic faith ever since. He & his wife are devout practicing Catholics who are excited to share the treasure they “found in a field” with the whole world. One of Joe’s passions is to travel and speak at conferences and parishes, passionately sharing the joy of the Catholic Church, how God saved him from porn addiction, evangelization, apologetics, and more.  If you would like to know more about bringing “The Catholic Hack” to your event, CLICK HERE.

Additional Background: Joe joined the Catholic Church at the Easter Vigil of 1999 and was married, to his lovely wife Michelle, in September of 2000. The honeymoon wouldn’t last long however, his self-centered worldview and pornography addiction managed to steadily destroy their marriage. Joe attributes the full flowering of the graces he received in the sacraments to a spring day in 2002, when, after loosing his job, and on the brink of divorce, he got on his knees and “let go and let God”. Joe describes it as an encounter with the living God, however, one whom he knew so little about, having squandered his time in RCIA, and rarely ever attending Mass. Joe’s journey went into hyper drive at that point, spending every opportunity to study scripture, reading, and listening to his favorite pastor’s sermons on protestant radio, in hopes of coming to know this “person” who came to meet him at his lowest point.

Seeing the protestant influence, and knowing of their eminent departure from the Church, a dear friend decided to reach out, in faith, in an effort to keep them in the One, Holy, Catholic, and Apostolic Church, by challenging Joe to listen to a set of tapes, from Dr. Scott Hahn, called, “Calling all Catholics to be Bible Christians and vice versa!” It proved to be a pivotal moment in his life, having heard, for the first time, a reasonable defense for the ancient Catholic Church. He would spend the next decade, and beyond, diving deep into his Catholic faith, studying from the heart of the Church, and he’s been in love with Jesus Christ, and the Catholic faith ever since.

In 2007, Joe felt called to utilize his training in radio, and his passion for the faith, for the glory of God, and the building up of the Kingdom, by producing a podcast. Choosing the name “The Catholic Hack!”, he wished to express humility rather than confidence, allowing his passion to shine as an encouragement to other Catholics, that they may begin to share their faith with others. By God’s grace, The Catholic Hack podcast enjoyed a world-wide audience with thousands of downloads every week. In 2009, Joe was asked, by “View The Truth Exodus Ministries”, in Brooklyn, NY, to revamp the podcast for radio distribution throughout Latin America, in order to reach a new audience. The “Behold The Man” radio show was born, enjoying a great two and a half year run. In addition to guest interviews on various EWTN affiliated stations, Joe also co-hosted “Finding Your Keys”, with Josh LeBlanc, on Radio Maria in 2010.

Having written several articles on the faith, and now a chapter in a soon to be released book published by Catholic Answers, Joe is blessed to travel and speak on Catholic apologetics, typology, scripture, theology, abortion from a man’s perspective, pornography, evangelization, Christian fatherhood, manhood and so much more. Joe and his wife are devout practicing Catholics who are excited to share the treasure of Jesus Christ, who came to them when they needed him most, the Catholic Church, with the whole world.  Joe and Michelle live in Spring, TX with their five kids, having entrusted their to the mercy of God.