It never ends well you know. First they apply public pressure, then they pass a law, they take just a little here, a little there; It’s not much, at first anyway, and too few muster the courage to stand up to the coming tyranny. Before you know it… their property has been confiscated, their rights rejected, their freedom trampled, and their blood pour out, like a libation, into the streets for all to see, as a warning… “cross the State, and this will be your fate!” It never ends well you know. I know what you’re thinking, “this is crazy, right-wing, nut-job, conspiracy theory, ‘birther’ stuff!” After all, isn’t this the “land of the free, and home of the brave?”  Really? Thankfully, due to the dedication of my tenth grade world history teacher, I love reading history. One doesn’t have to go very far back into time, to see example after example of the State declaring its superiority over God, His Church, and His people.  Let’s take a brief stroll down memory lane; shall we?
By the time Sir Thomas More was arrested, in April of 1534, King Henry VIII was already declared, by a law passed in parliament, Supreme Head over the Church in England.  Henry confiscated all Church property (giving it out to his nobles as he liked), forced all his subjects to take an oath, most of which did, and shed the blood of those who refused, holding firm in their religious convictions.  St. Thomas More, and St. John Fisher, as well as, “a certain number of Carthusian monks, Brigittines, and Observant Franciscans…(Henry VIII, NewAdvent.org,Par. 9)” were just the “first fruits” to make a stand and lose their life in England for the faith, there will be still hundreds more in the decades that followed. Bishops, Priests and laymen, all forced by the State to reject their faith, or die at their hand. It starts with a simple law, but, it never ends well!

It starts small at first, a simple law is passed, a law intended for the betterment of society… this is a good thing; right? In November of 1789 the French Assembly passed a law and confiscated all the lands of the Church, giving them over to the State for safekeeping.  The State would, of course, do a much better job at maintaining property, seeing to the interests of the people’s revolution, and caring for the clergy than the Church had ever done; or at least that was the “party line” given to the people.  By 1790, “…all monasteries, convents, and other religious houses were suppressed (The Story of The Church, Unit 3 Section IV The French Revolution, pg. 387, Benzinger Brothers Inc. 1946).” Further laws were passed, oaths required, and more restrictions, violations, and atrocities ensued.  By 1792, when King Louis XVI was thrown into prison, and later executed, some two hundred and fifteen priests would lose their heads, literally, at the hand of the “State”.  It starts with a simple law, but, it never ends well!

Seizing the opportunity to bring Communism to Russia, the Bolshevists, took charge of the revolution that sent the Czar running for his life in 1917. It was not long before the state, of soldiers and peasants, started passing laws, in pursuit of Karl Marx’s utopian ideal, to rid the people of private property, and to rip the people from the hands of God. Orthodox schools were shut down and the children were forced to attend state sponsored schools where anti-God propaganda permeated through the curricula. All religions were suppressed, and laws passed designed to violate their  deeply held religious conscience’ (The Story of The Church, Unit 5 Section IV The Peace of Christ in the Reign of Christ, pg. 477, Benzinger Brothers Inc. 1946).  The Communist war on God would not stop at mere propaganda though, but, rather, the flames were fanned by violence, hatred, and the darkness of man’s heart.  Secret Police began rounding up the clergy and laymen who would not submit to the state’s desires, throwing them into prison, confiscating their private property, and spilling their blood in the streets. It starts with a simple law, but, it never ends well!

By 1926 President Plutarco Calles, was well on his way to “modernizing” Mexico, taking a “hat-tip” from the Communists in Russia.  The “Calles Law” was passed and the property of the Church was confiscated, and the number of ministers, in each state, was regulated by the Federal Government.  Only 4000 Priests were allowed to serve some fifteen million Catholics in that year, but, when they petitioned the government to allow more, the number was further reduced. So much so, that by 1935, only some 300 Priests remained, and many of Mexico’s States had no ministers at all to serve the faithful (The Story of The Church, Unit 5 Section IV The Peace of Christ in the Reign of Christ, pg. 478, Benzinger Brothers Inc. 1946). Hoping to stamp out God completely,  Calles’ reign of terror unleashed a terrible persecution upon the faithful of Mexico that would last many years. Priests were forced to mary, forbidden to wear clerics in public, Catholic schools closed, Clergy, Religious, and laymen were imprisoned, tortured, and executed, when they refused to renounce their allegiance to Christ the King.  A peasant army rose up and fought back under the battle cry, “viva cristo rey”, “Long live Christ the King!” More than the success of the military engagements, at the hand of peasants against the Federal army, it was the power of the silent witness of martyrdom that sounded the defeat of tyranny.  Like Sts. More & Fisher in  England, 1534 & 35, Blessed’s miguel pro, and Jose Luis Sanchez del Rio, and others, would defiantly stand up to the attack on freedom, the attack on truth itself, the attack on Christ Jesus! Having forgiven their executors, they died triumphantly with the war cry fresh on their lips,“viva cristo rey” (Picture is of Bls. Pro at his execution).  It starts with a simple law, but, it never ends well!

Despite the fact that the Cristero war was just shy of a hundred years ago, and just south of our border, many still mistakenly think, “no, that could never happen here!”  We should be careful to avoid such naive notions. I have only mentioned a few examples through history of States abusing their God given role of governance, and persecuted His people.  If you think it can never happen to us, ask yourself how the Jews felt in Poland in the 1930’s and 40’s. How about the Christians today in places like Nigeria, Sudan, Egypt, Pakistan, Iraq, Afghanistan, Iran, Somalia, Algeria and however many other parts of this world where death and persecution is a reality of their faith.  Or the Buddhist in Tibet at the hand of China? Or even the black Muslim in south Sudan having been slaughtered at the hands of Arab Muslims?  We in the West have become complacent, thinking, “it could never happen to me!”  Do not be fooled! It starts with a law forcing Catholics, and many, many others, to violate their conscience’ and support the evils of abortion and birth control.  Will it end there? Did it end there at any other point in history?  No! If nothing is done to reverse this course, we will, as Cardinal George, in Chicago, recently said, be forced to close schools, hospitals, charities, ministries, and more in order to not violate our deeply held religious beliefs.  Such a void would inevitably filled by the State and its ever increasingly anti-God propaganda. Maybe, this is what they want after all… a “buy-one, get-one free” deal!

Lest you think we fight for only for Catholic freedom… think again! We stand and fight for the freedom of all men! As one famous US Catholic Archbishop once wrote…

“That a fierce spirit of intolerance has been lately evoked in this once free country, no candid observer of passing events will deny. Christians of a particular denomination have been selected, as its first victims; but no one who has studied human nature, as it is developed in the facts of history, will for a moment suppose, that the ruin of Catholic in this country will satisfy the cravings of this fierce Moloch of religious bigotry. As with the tiger, the taste of blood will but sharpen its appetite for new victims. So it has been in the past; so it will be in the future.” (The Church, Culture, and Liberty, Archbishop John Spalding, D.D., chapter 1, pg. 1, Joseph Wagner, Inc. 1923)

It starts with a simple law, but, it never ends well! History is replete with examples, but, have we learned our lesson, or will we decide to “test” fate once again, and see what happens?  Do we really think our outcome will be any better? Stand for religious freedom while you still have the “right” to do so.  The law has been passed and the next steps are being taken.  Decide now to live for Christ, so that you will have peace if you are ever asked to die for Him!  “Viva Cristo Rey!”

Mens Day of Prayer
I'm on EWTN TV... well... sort of.
"The Mystery Unveiled: A Catholic approach to the Book of Revelation" w/ Scott Hahn

Matthew Warner, Fallible Blogma, called for a “support Catholic speakers” month and lined up 100 blogger’s to pick a speaker. It’s a […]

Great news! Fullness of Truth Catholic Evangelization Ministries is now streaming their conference talks 24/7 via their website. Working with some of […] 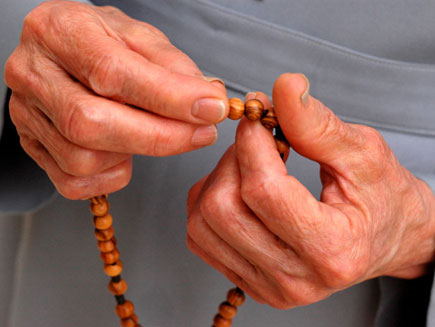 “Gotcha! Jesus said in Matthew 6:7, ‘But when ye pray, use not vain repetitions, as the heathen do: for they think that […] 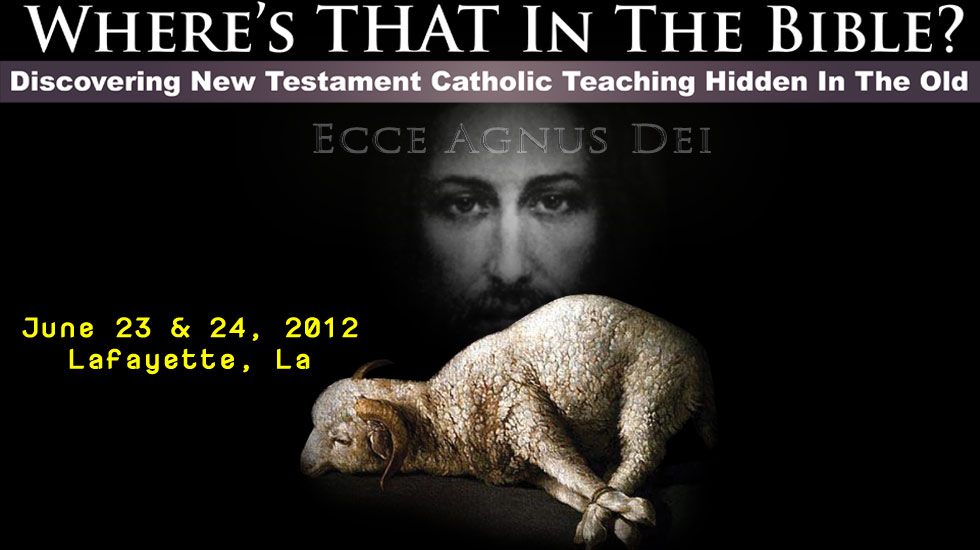 Discovering New Testament Catholic Teaching Hidden In the Old!   Is the Catholic faith biblical? Where in the bible is the Eucharist, […]